If anyone is playing on the Homecoming servers there is a Legion of LiveJournal global channel. It's LOLJ of course. There's maybe 8 people who have reconnected so far.

I believe it may be set to private at the moment but you can message me or fka Big Angry to get on; we're both on a lot. I changed my global from @erydanus to @eridanus and BA is now @bishamon. Of the people from this community I've seen back so far, several are on Everlasting primarily and a few are primarily on Excelsior. I don't see anyone playing on Indomitable or Torchbearer much.

I'll update this post with other moderator globals as I get the chance.

Been playing on the Homecoming servers for the last week or so. Wrote a review. I sure hope it lasts and NCSoft doesn't shut it all down.

Someone on Reddit located the old Gnarly's Speed on Demand bindkit, which seems to be nearly impossible to find. It's available for download at this link.

Sooo... anyone still watching this site? Reactions to the recent news about CoH?

I wanted to pass along news. A member of our community has passed recently. John F. Martin, or known here as FurrySaint, player on Virtue.
(http://furrysaint.livejournal.com/)

Hopefully he's found our other passed supers to team up with where he is now.

Okay, I'm at my wit's end here. I dunno who might still even be watching for posts here, but I thought I'd give it a shot. If nothing else, maybe I can talk the hubby into going to Reddit for help or something.

Here's the thing. I just recently [finally] got the City of Heroes stuff back on my computer. Got the demorecords I have to play back with pretty much no problems...I had a few that wouldn't play, but I seem to have figured those out.

Problem: I was an idiot, and taped one of my chars from *behind*. **facepalm** I have vague memories of playing with a demorecord waaay back when, and being able to "free" the camera [you know, make it so that you can zoom around looking at other things besides your character...and could circle around your character and stuff] The thing is I don't recall for sure if it *was* a demorecord, if I did it while in-game, or what.

Everything I've come across mentioned Zloth's CoH Demo Launcher...which I don't seem to have a copy of [maybe, I still have to dig through my archive disks...it's POSSIBLE it's hidden on one] as the go-to for looking at Demos.

I guess I should ask if it's possible to do that with the demorecords at all. :P Would I need something like Zloth's launcher, or get the game to run the demorecords somehow and do it that way? Either way, I don't recall how to get the camera "free", and I can't remember where I read how to do it. :P

And if Zloth's launcher *would* do that sort of thing...does anyone have any idea where to *find* it? I've come up against the black hole of the dreaded 404 error...*sighs*. This is what I get, I suppose, for wanting to do stuff years after the game has gone away [I still miss you CoH! *hugs*]

Any help anyone can send my way would be GREATLY appreciated! ^_^ 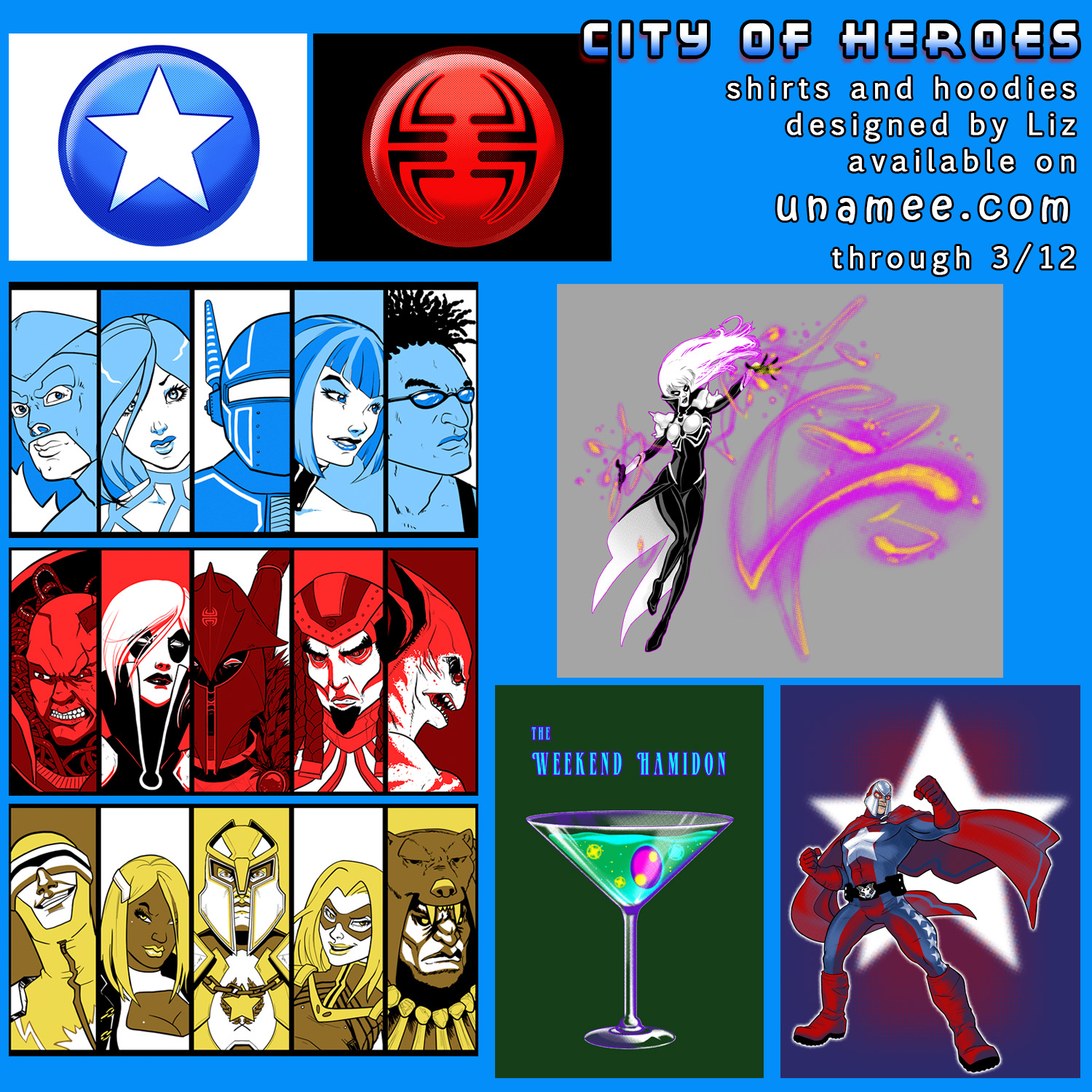 Designs are up from now thru Thursday 3/12!

I will make my new designs available on RedBubble after the sale, and try to get some more in relatively soon. I do want to at least add Vigilante and Rogue to the mix, and get versions of all the Archetypes and possibly Origins up there, too.
I intended to take the designs down at some point, and may still, but wanted to get thru all the ATs before I took any options away. Then there was my super busy summer...

Watched Mystery Men last night and it reminded me (again) so much of City and how you could come up with any name, costume and character concept and it was all good.
Collapse