Special Message from Doug The Troll

jesterspace that he was stuck in the hospital with a herniated disc. And that he can't play CoX right now.

Doug, take it away!

A familiar sight as Rocketfire is hard at work.

But something ain't quite right with him. I mean, look at those feet.

"Super Doug, we have a special case for you."
"Ooh! Doug love cases!"
"Er..right. Anyway, listen..."
"Doug listen!"
"Would you just...never mind. Look, Rocketfire got nailed pretty bad by some perps the other day."
"Not funny Helmet Man! Doug love that guy!"
"If you'll just look over here..."

"He's got some pretty bad problems with his back that's gonna take him out of the game for awhile."
"That no good, Doug think."
"It's not. So, we need you to do a favor for us."
"Okeey dokey!"

Yes friends, he has...ahem...borrowed Rocketfire's suit in the name of justice and all that good stuff. 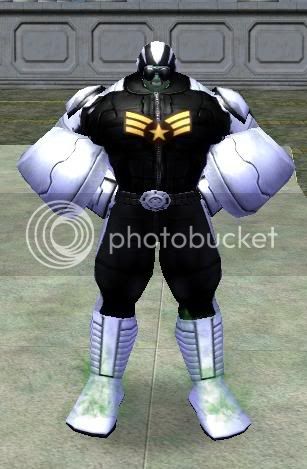 Though he might want to give the boots an extra good cleaning when he gets out of the hospital.

"Hey! Desk man! Come to Doug! Doug not know how to make suit work! And it am ride up in back!"

"Gah! No wonder it no work! This am toaster stuff! Doug no understand toasters!!"

"You am get better soon or Doug gonna wear these am boots all the time!"